Traci was fun to make, probably because she was made with love for my favorite hair stylist. Traci has blonde fun fur hair with a few streaks of color and blue eyes almost like the real Traci minus the fun fur for hair.

Her dress and slip on shoes were made with a Batik fabric and a solid hot pink fabric for her pants. I purchased a child’s size toothbrush, cut off most of the handle and then rounded and sanded the end to make it smooth, (Dennis did the cutting and sanding part). Voila... a little hairbrush! I also found a pair of tiny scissors and a hair blower that were little charms and tucked then into her waist band of her dress.

Here she is at her new home BB Harringtons in Chandler, Arizona.
Posted by Rose at 2:54 PM

My latest doll is Sue Vivor…….

Her face is sculpted and colored using prisma pencils for her features and micron fine point pens were used for thin lines around eye and eye lashes and brows. Oh I almost forgot I used gel pen for her pupil and whites of her eyes. She is wearing a hot pink dress with lace trim. Her black pants have tiny hearts on them. I used pink ribbon enamel charms as earrings. Her long black hair is a mixture of solid fun fur and flecked fun fur with color. I used two tiny scrunchies to pull her hair back away from her eyes it also makes it easier to see her earrings. She has individual fingers on her tiny hands which are sometimes a pain to make (I should say always a pain to make). I must have made 3 pairs of hands before I was happy with the outcome.

She is joining other artists' creations in the Saving the Tatas battle against breast cancer Silent Auction, at Gallery 225 in Gilbert AZ, October 15, 2010 from 6-9PM.

Please join us for this charitable event. 100% of the silent Auction and raffle proceeds go directly to Susan G. Komen, Passionately Pink for the Cure.
Posted by Rose at 12:20 PM 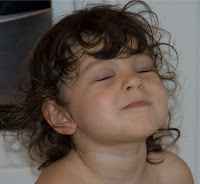 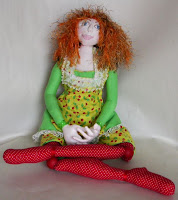 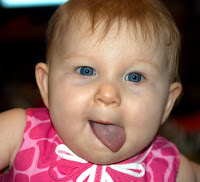